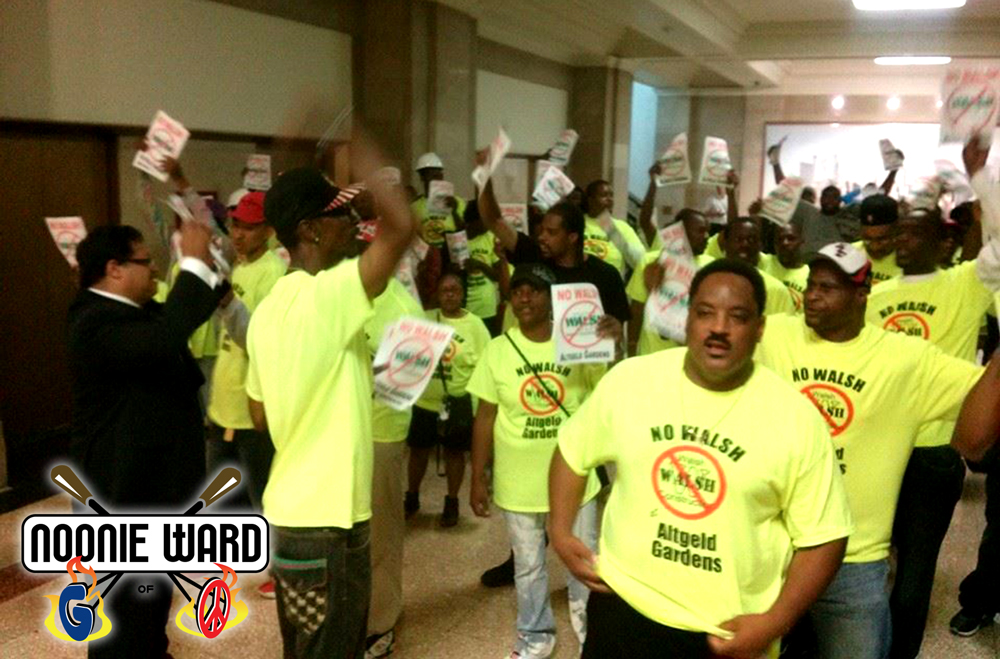 June 24th, 2014 – Dozens of Altgeld Gardens residents and supporters gathered outside of CHA headquarters on June 24 to protest the consideration of the politically connected Walsh Group construction firm for a redevelopment contract in the project. If the CHA awards Walsh the deal, activists say, it will be effectively ignoring its obligations under Section 3 of the federal Housing and Urban Development Act, which requires public housing agencies “make their best efforts” to provide job training, employment and business opportunities for local low-income residents.

Based on Walsh’s track record, activists say, those opportunities for locals would be scarce at best. In 2013, several residents of Altgeld Gardens filed suit against Walsh Group and the CHA, alleging that Walsh failed to provide them with priority employment under Section 3 while the company was performing construction work in Altgeld Gardens in 2009 and 2010. Additionally, according to the CHA directory of Section 3 employment opportunities, Walsh currently does not offer any jobs for Section 3 workers in the Chicago area. Locals fear this means that any new jobs created by the construction project would go to workers from outside the housing project.

Ideally, activists point out, public agencies would use the job creation regulation outlined in Section 3 to give poor neighborhoods a much-needed boost.

“We will help stop the violence in our urban communities when we stop the economic violence that causes far too many of our urban residents to be caught up in gang, drug and other illegal economies, when they should be working legal jobs that should come [with] local development contracts like CHA has. [Big businesses] and our elected officials for far too long have [been] allowed to exclude local contractors and workers,” says Harold “Noonie” Ward, chief organizer of the protests.